I don't  have any idea what is going on but for the second
time this whole blog entry has disappeared! We need a
miracle to get it back!

If you remember when the last post ended Florrie's sister
Joanne and her husband Alan were visiting from the states.
We had all just watched the Yabusame practice. We're going
to share some of our adventures but not try to put them in any
particular order.

On the map below you can see the Aomori Prefecture which is
where we live. Misawa is the dark bit on the map. 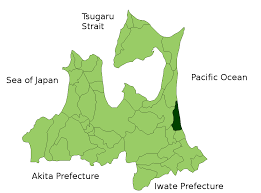 One day we decided we would take a drive all around what
looks like a hatchet head but is actually the Shimokita Peninsula
Our hope (especially Joanne's) was that we would see some of the
wild monkeys that live on the Sea of Japan side (Tsugaru Strait, on the
map) side of the peninsula. We were driving along when all of a
sudden Alan exclaimed, "Monkeys!" and there they were! We
stopped in the middle of the road and took pictures. There were
babies but as soon as we stopped the adults gathered them up
and took off so we didn't get pictures. Still, it was quite exciting.
I always enjoy seeing any type of creature.

We continued our trip as we wanted to show Joanne and Alan the
cliffs of Hotokegaura. This is an eerie but beautiful place along
what would be the blade of the hatchet if this area was really a
hatchet. You can read a little about the place here. 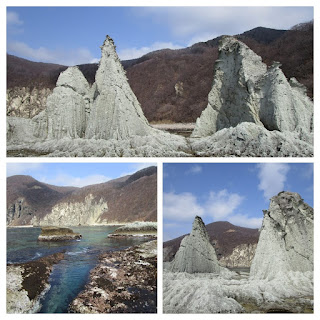 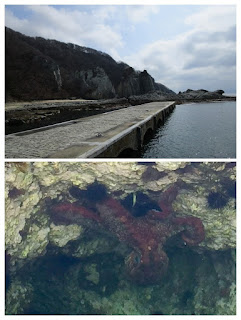 Do you see the octopus? Joanne took that picture, we
hung out and watched it for a while.

These pictures are actually from a different visit to the
cliffs but I wanted to show the little shrine in a cave we
passed on the way down and the other one inside a building
down among the cliffs. 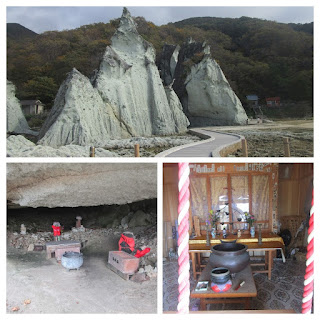 Pretty much anywhere you go in Japan you see rocks
with messages engraved on one or two sides. Chris and
Florrie never know what they say and I'm a quiet fellow
so I never tell. 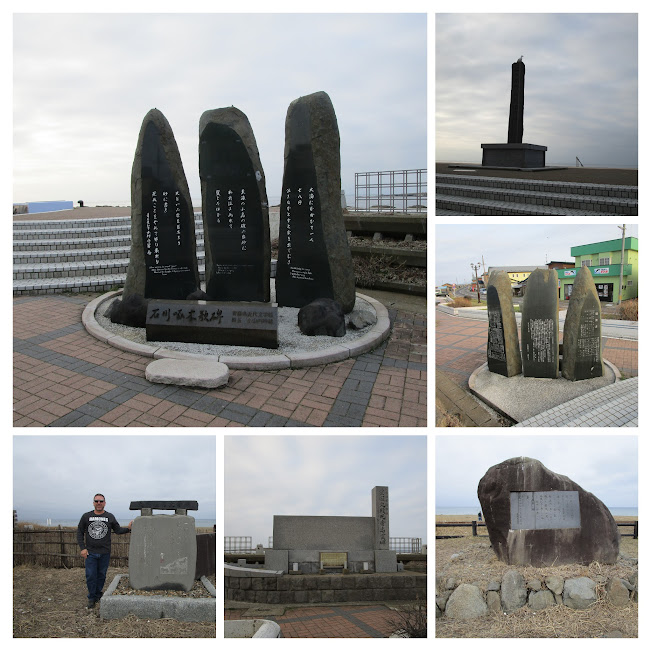 Alan was determined to at least put his toes in the Sea of Japan! 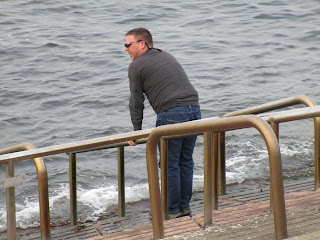 More places we saw on the trip around the hatchet. 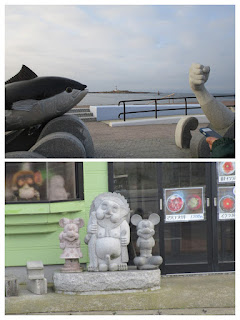 The fish and fist are a sculpture in the town of Oma
which is at the very tip of the hatchet, and the northernmost
point of Honshu Island. The fat naked creature is a tanuki
who is very important in Japanese folklore; if you are
interested in learning more about them check out this link 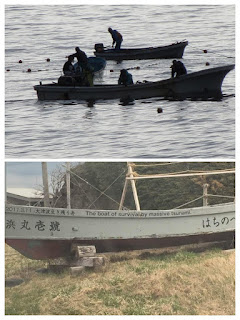 We also saw these boats, one still in use and one retired.
Can you read the writing on the bottom boat? Florrie, Chris,
Nemo and I were all here during the earthquake/tsunami/
nuclear disaster. Florrie and I both posted blogs about our
experiences. If you'd like to read them you can check out
this old post and this one.

Another day we drove south and checked out the Tanesashi
Coast, as you can see it is another beautiful place. I
understand why Florrie wants to live on the coast when
she retires. I don't like to brag but isn't the world an
amazing place! The Tanesashi Coast is a beautiful area
south of Hachinohe; there is a five km trail which we did not
walk because we had a busy day planned. Florrie has walked
it before and hopes to walk it again.. 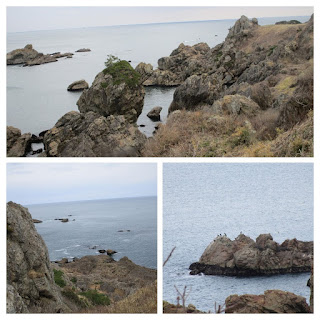 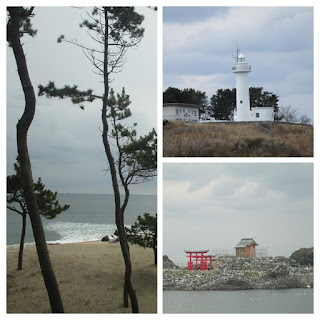 In Hachinohe we had a sake tasting and brewery tour. You are
warned not to eat natto before going on one of these tours.
For many people, especially non Japanese, that is not a problem.
Natto is ferment soybeans. It is very sticky and has a taste many
people find troubling. In fact, if you want to see a reenactment
of Tom Hanks eating caviar in Big just give natto to someone
who has never had it before. The reason you don't eat natto
before the tour is because the kojikin (koji mold) used in
the steamed rice that is goes into making sake is very delicate
bacteria and the bacteria in natto overpowers it. 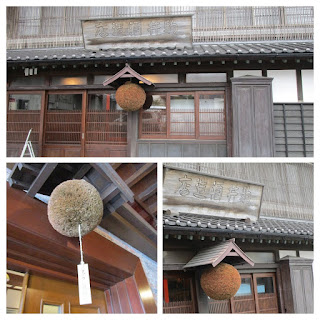 A cedar ball, or sugidama, is how you identify a sake brewery. A fresh sugidama is put outside the brewery when new sake is brewed. As the leaves gradually brown they show the age of the sake. 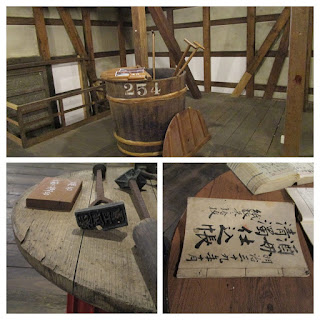 The top floor was a little sake making museum. Below are the women who helped with our tasting and tour. When we decided it would be fun to add a drop of the water the sake was made with to the sake (like you do with whiskey) they joined in on the tasting. 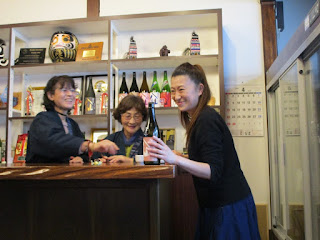 We also took an overnight trip to Aomori which is
a city north of Misawa. On the way we stopped at
the big Buddha. 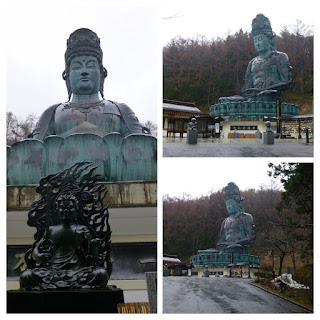 He is the Great Showa Buddha of Seiryuji. This statute is actually the tallest bronze seated statue of the Buddha in Japan. We were able to go inside the Buddha and the Seiryu-ji Temple to see some exhibits and to explore the grounds,  which were lovely and tranquil. 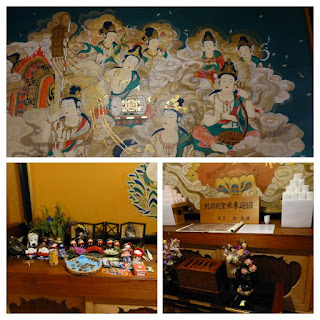 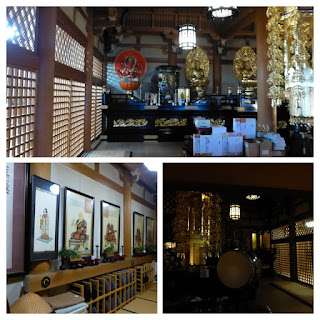 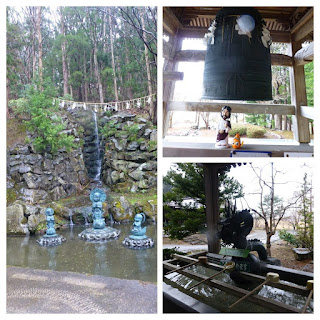 Working on this disappearing blog makes Florrie
wish she could go back to the Zen garden at on the
temple grounds. 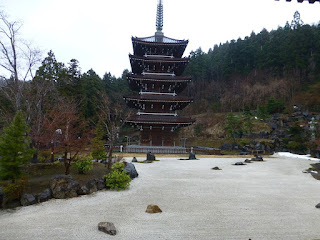 Because there was no miracle, and this post has
been so troublesome, and this is the last picture
posted the second time the whole blog disappeared,
I am going to post now even though we are still
in the middle of our adventures with Joanne and
Alan. I'll try to finish later today or next weekend
but this is not a promise. Until then
じゃあまたね (Ja matane or see you later)