Nemo and I had a great time in China. Our friends Chris and Florrie enjoyed themselves too; the Chinese were nice people. Nemo was excited because everyone recognized him; strangely enough many of them didn’t recognize me! We were all spoiled; we had a guide and a driver all to ourselves. This meant we didn’t have to spend time looking for parking places and doing what other people wanted to do. It was probably the best way to see a country that is as foreign to us as China. We started and ended our trip in Beijing.

First we went to Tiananmen Square and the Forbidden City; the square is basically in front of the city. The square was sort of like a big piazza without the tables. The guards didn’t want their pictures taken but Florrie got this guy in her picture accidently. 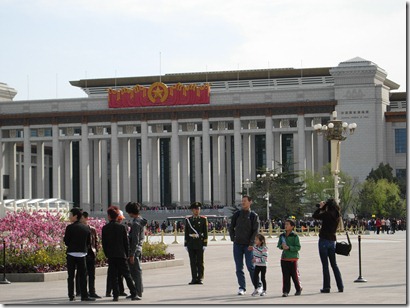 The Forbidden City was a fascinating and beautiful place. Many of the buildings are empty now but some of them had furnished rooms. 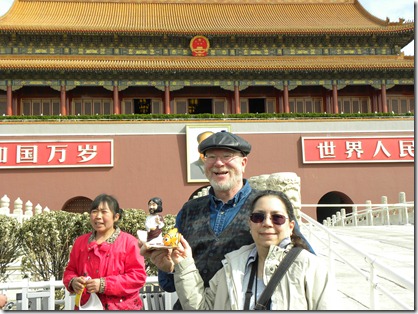 We couldn’t go into the rooms though, we just had to do our best to see inside. I think this was Chris’s favorite part of the whole trip. 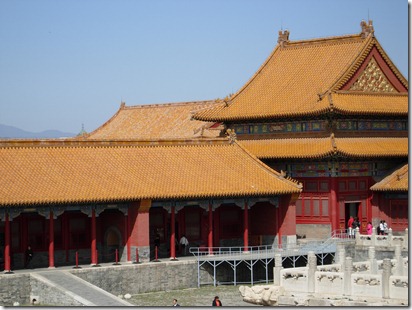 Here we are getting ready to try to peak into a room.

But as you can see, even the Monks had to wait their turn! 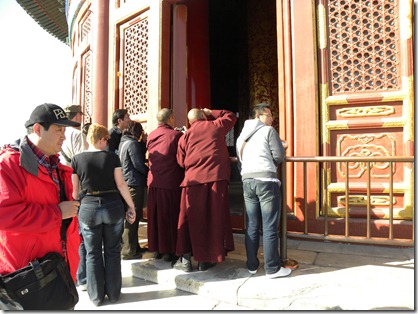 Our first day in China we also went to the Summer Palace and the Imperial Garden. 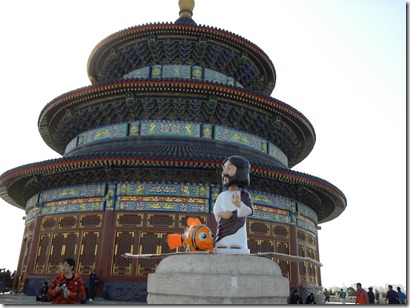 Both were wicked cool but not quite as cool as The Forbidden City. 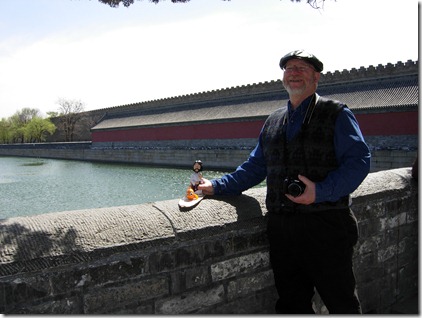 That first day no matter where we went our friend Chris was really into taking our picture. 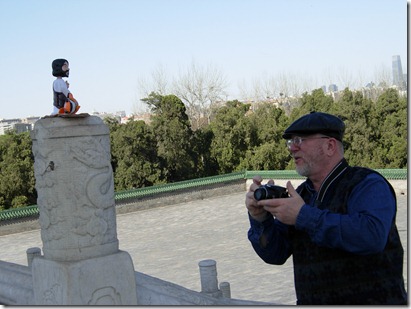 After visiting a silk factory and seeing how silk was made we went  to an acrobatic story of Kung Fu show and a Peking Duck dinner. Both were not what we expected but were very good.

The next morning we all took a ride in a pedicab. 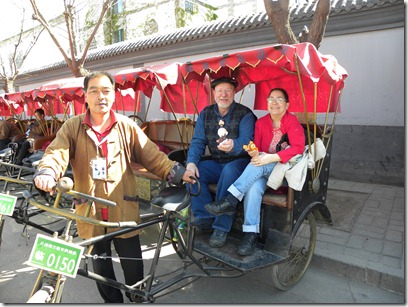 WE explored a hutong (an old Chinese neighborhood). 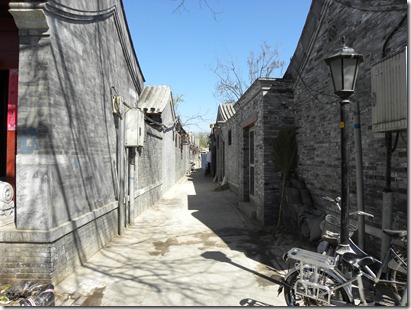 After a quick lunch and a visit to a pearl factory we jumped on a train and headed to Datong. We spent about six hours in a train with three Australians and two sets of bunk beds. They were nice people; we were all glad this was a late afternoon/evening trip not a night trip. Unfortunately we chose to eat on the train that night. Chris and Florrie had mostly onions and  our new friends had rice and eggs. 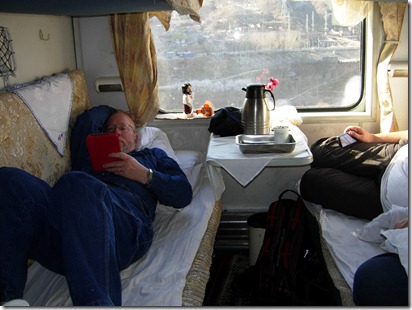 Our first full day in Datong was a little nerve racking. We climbed all over the hanging monastery. I enjoyed spending some time with like minded fellows. 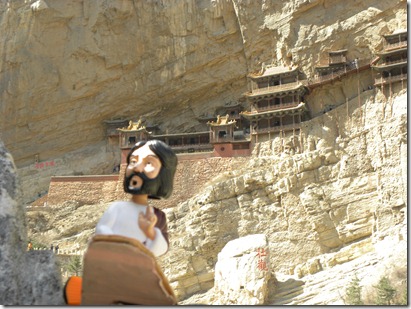 It was just sort of built into this cliff! Florrie made Chris very nervous by leaning back on the railing trying to get a better picture. 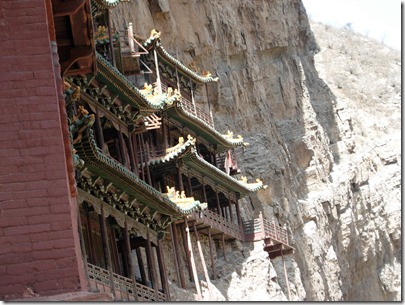 In Datong we also went to some caves with thousands of Buddha statues. 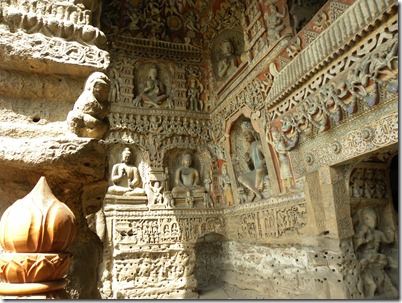 I was a little concerned about mixing it up with many Buddha; so I enjoyed the place from the safety of Florrie’s purse! 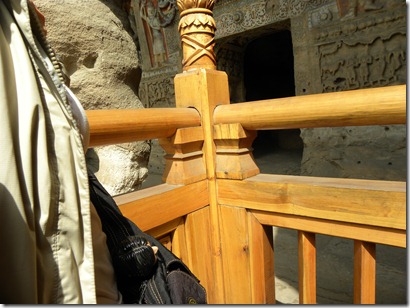 After a few more adventures in Datong we all hopped the over night train for Xian and the Terracotta Warriors. This was a 16 hour trip. The beds were uncomfortable and the outside views were rather squalid for the evening part of the trip. We brought our own dinner but didn’t do much better than on our other train ride. 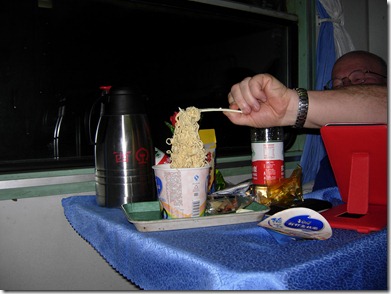 We did discover you can “cook” these noodles with cold water. The next day we arrived in Xian where Nemo ran amok with some newly made terracotta warriors. 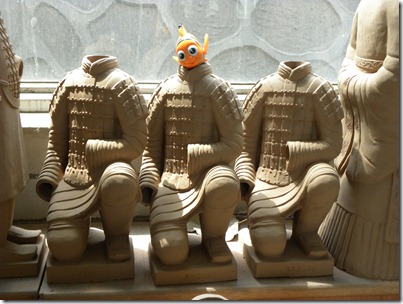 I tried to stop him but he just wouldn’t listen to me! 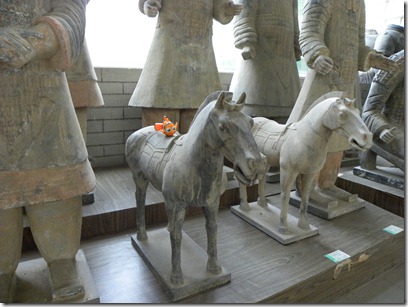 The real guys were just amazing. Florrie and Chris agreed that seeing them in the actual spot where they were found far outshone seeing the traveling exhibit they saw in Ohio years ago. 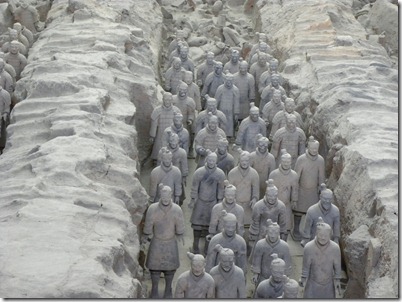 After the warriors we checked out the city wall around Xian. 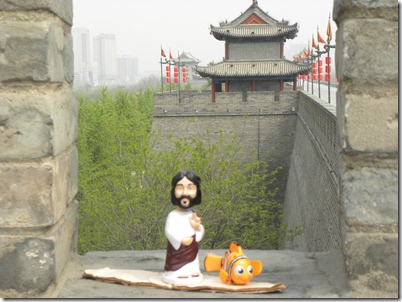 Unlike the walls we have seen in Europe these walls were so wide we were able to take a bike ride down one side of the city wall. 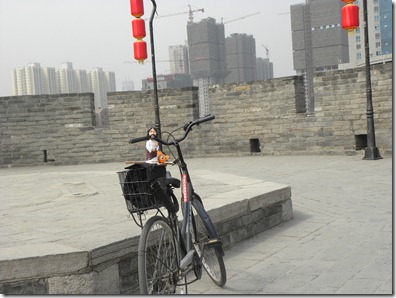 Another over night train ride, this time in a luxury two bed cabin, with our own western style toilet, brought us back in Beijing. 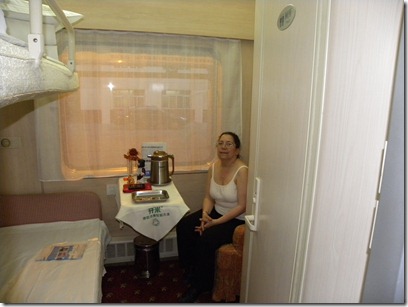 After getting back to Beijing we went to the drum tower where we were lucky enough to see a performance on the great drums. Florrie really liked this as she is learning to play the Taiko drums in Japan. The ones she plays are not quite this big. 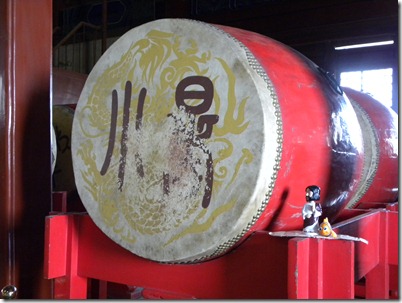 The last part of our trip was the Great Wall! We took a cable car up and went down on toboggan like sleds. We also walked a long section of it. 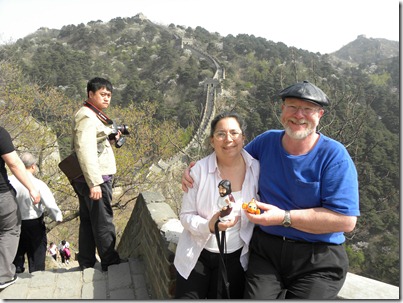 This was a high light of the trip for all of us. 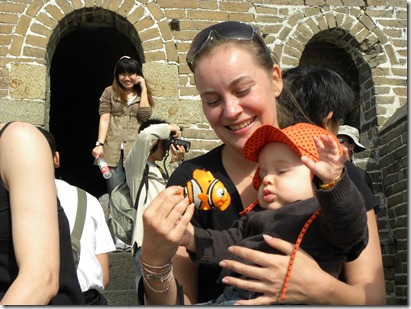 We all enjoyed the fantastic views. 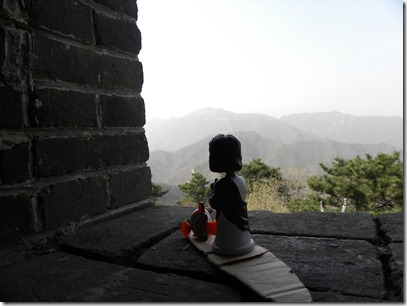 Even though you really can’t see the wall from space it’s truly an achievement. Oh! They really did bury the people who dies building the wall within it. 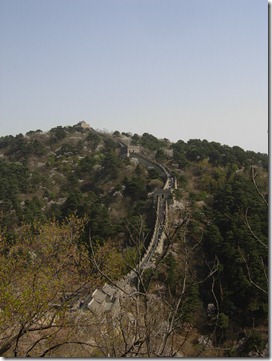 Once again Nemo ran amok! Some young Chinese men encouraged him to disregard the signs when they went farther along the wall then they were allowed. I think his popularity was giving him a big head. Chris and I had to go and rescue him. 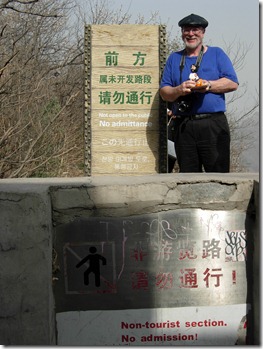 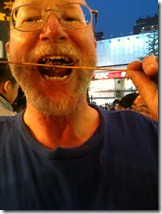 Our last night in China we all walked to a place called food street where both Florrie and Chris tried some of the local cuisine. Nemo and I refused! 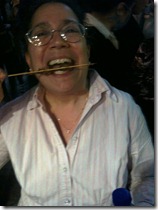 A few days after arriving back home to Japan Florrie got an email telling her that we are all off on another adventure. Next school year Florrie will be teaching in Germany. We all are sad to leave Japan but excited about having some new adventures to share.

Posted by Jesus and Nemo at 3:03 PM No comments: