Nemo and I enjoyed watching the big scantily clad fighters. We learned a lot about the sport of Sumo and got some great pictures. We also got some really good pictures of our adventures in Tokyo; unfortunately Florrie deleted all of the pictures! Fortunately Chris, with the help of St. Recovery Disk, was able to save a few of them and our friends let us use their pictures from the Sumo tournament.

Taking the Shinkansen was quite efficient and comfortable. It was our first time.

The public transportation system in Tokyo works well and is pretty easy to understand as many lighted signs cycle through both Japanese and English. It helps that everything is color coded and you can get maps in English.

We spent some time in Florrie’s father’s old stomping ground, Ginza, in fact they have a fun custom we stumbled into. On Sunday they close down the street and put tables down the middle of it so you can eat there. We had a nice little meal although none of us are exactly sure about what we ate! 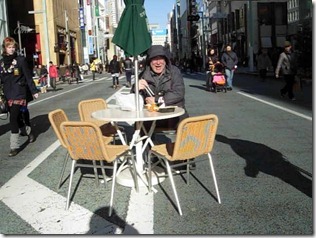 We did some sight seeing also. We went to a museum where we made a new friend, Lego Boy. Sadly his was one of the pictures we lost but there are some pictures of us at the museum.

We enjoyed the displays especially the ones we could play in!

Our friend lego boy joined us in the wagon later.

We experienced some of the other exciting districts of Tokyo such as Shibuya which is the place to go if you want to cross the busiest crosswalk in the world. Of course we did!

We weren’t there during a very busy time but it was still cool.

The main purpose of out trip was to see the Sumo Tournament. We enjoyed this and learned a little about this ancient sport. It was originally a performance to entertain Shinto Gods. Much of the ritual associated with the sport comes from this religious background. I always like it when I see people giving proper respect to their gods. None of the matches take long as all it takes to lose is for any part of your body except the soles of your feel to touch the ground or for a person to leave the ring. Some of them fell on spectators! Ouch!

The brightly dressed guy is like a referee, they change their outfits more than a fashion model. They have nicer clothes too.

Before each match starts the fighter shows that he is not concealing any weapons.

This was early in the day before all the seats were taken. This fighter is not one of the top fighters; they fight at the end of each day. Next the fighters try to intimidate each other.

At the end of the day there is a lot of pageantry with the bow dance and then the top fighters all come out and parade around the ring.

All in all Tokyo was an interesting place and one we hope to go back to. We enjoyed the other parts that you don’t get to see as well; dinner in the looney bin, the old Olympic Village, the crazy boot store, the electronic area, and assorted other places. Until next time sayonara.

Posted by Jesus and Nemo at 1:10 AM No comments: