After the lighthearted first six days of the vacation our road trip became much more serious. We drove up to the north coast of France to visit the D-Day beaches. These beaches (in fact most of Europe) were the scenes of astonishing examples of bravery and tragedy during WWII. It’s too bad humans haven’t learned anything from all the wars we’ve  had except how to make more deadly weapons. Not even I am able to do anything about this. Everywhere Florrie and Chris take us we pray to the local gods for world peace, but it hasn’t worked yet. 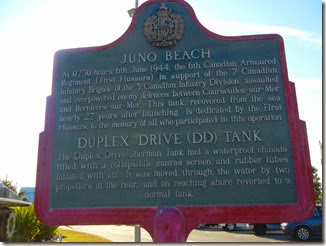 Our hotel was on Juno Beach, there is still evidence of the battles there. 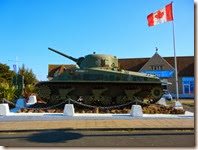 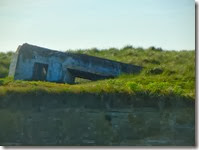 People from many parts of the world fought together on this battlefield. Here is the memorial build to honor all those who fought there. 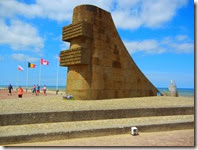 Omaha Beach was another stop on the trip with still another memorial to honor the dead.

Every beach had it’s own memorial and almost everywhere we went there was a museum. We didn’t go into all of them. Here is a collection of museum pictures. Nemo and I enjoyed exploring the exhibits.

This is part of a portable harbor built during the invasion. 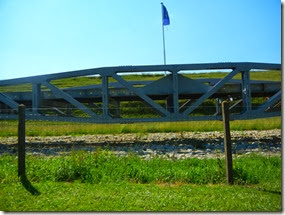 There is a video on YouTube but I don’t know how to embed it; we didn’t have all this newfangled technology when I was walking the earth. Here is the link if you want to check it out: http://www.youtube.com/watch?v=fWO5wpZGG14 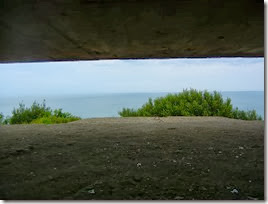 We all imagine it was scary for the Germans looking out this pill box when they saw all the ships out there.

We also went to the American Cemetery which was very moving. There was a museum and personal stories of some of the men and women buried there. 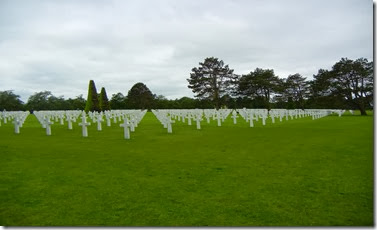 We have been to other Cemeteries like this and are never able to leave with dry eyes, no matter who is buried there.

Chris was able to do some fishing (but no catching) one day. 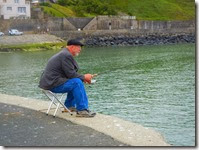 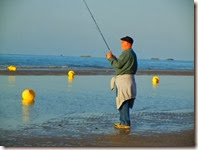 We drove through some charming little towns on our trip. 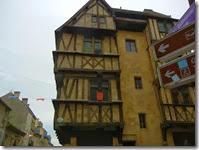 One of the towns was Bayeux which is famous for  The Bayeux Tapestry. 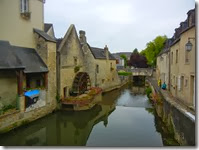 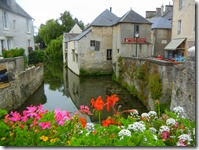 Many of you know that we spend two weeks most summers at Pennsic, which is a two week medieval festival. The Bayeux Tapestry plays an important part in Pennsic life. In fact, do you see the blond centaur on the top border? Florrie has embroidered her in the Bayeux Tapestry style and she lives in our tent during Pennsic. 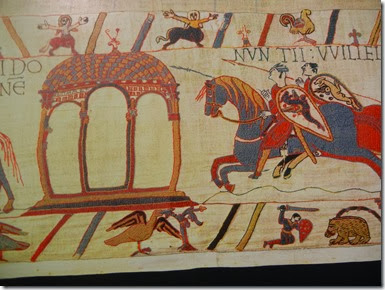 Well, we must all say good-bye, or Ciao for now. We are about to start on a new adventure! Our next blog will be all about our rather sudden move from Germany to Italy.  We lived in Italy before we started this blog. We were in Gaeta which was on the Mediterranean, almost exactly half way between Rome and Naples. This time we will be even further south, all the way down to Sicily. We are hoping to find as cool a place as our last home in Italy, but this time with a view of the ocean and the volcano!

This is our 11th year in DoDDS and our 5th big move. Crazy!

Posted by Jesus and Nemo at 8:42 AM No comments: