We all went to Prague over Thanksgiving. We had a great time and really enjoyed the city. 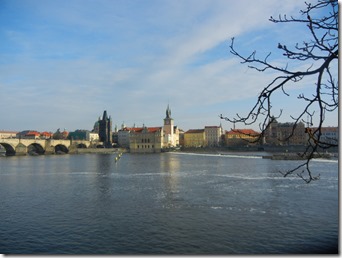 This is a famous German song about the river. We went to a concert in this church where Chris was moved to goose bumps by the performance. Florrie wasn’t; but she enjoyed the people watching. 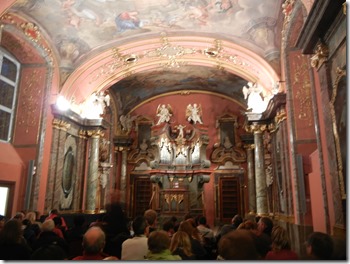 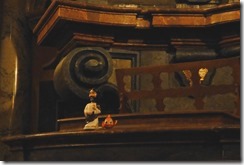 Nemo and I enjoyed the concert; it seemed that every where we went in Prague there was one coming up. We were happy that Chris let a persuasive young man talk him into this one. 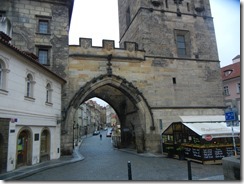 Our hotel was right on the other side of this arch. We did a lot of walking. Well, Chris and Florrie walked we were carried.

Prague at night is beautiful city; however it is rather silly to go on a night cruise in a glass walled boat as all you really see is your own reflection! You need to be outside to enjoy the city. 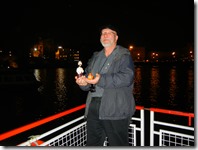 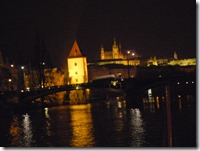 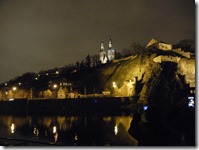 Views of the city at night from the boat and from the land. 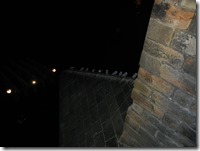 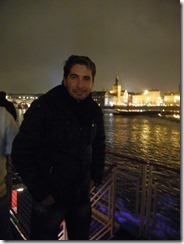 We met this nice young man on the boat. He is from Italy and spoke more English then we spoke Italian. We managed to become friends.

Speaking of young men; we met these two guys from Columbus Ohio.

One of them was in film school so we directed them to a very interesting film museum we had visited. 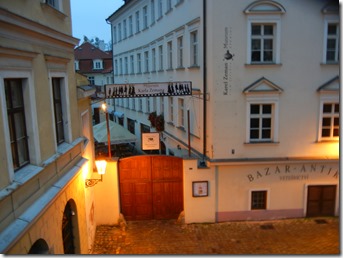 We spent some time relaxing, and speaking of films, we went on a movie tour of Prague. 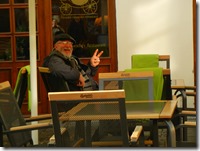 See how many of these places you recognize: 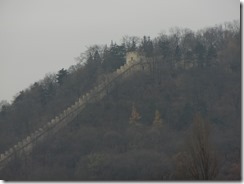 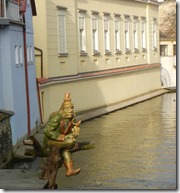 This bridge and the street you see from the bridge were both used in the first Mission Impossible move.

Do you remember the masquerade ball in Van Helsing? the one where all the quests but two were vampires? That was filmed in this church. While on the tour we came across a Soviet era train station in an extreme state of disrepair. Later we all went back and got some pictures.

Ever since Japan Florrie has been noticing manhole covers. There were at least three different designs in Prague. 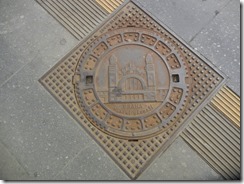 This area is known as Saint Wenceslas Square; he is the patron saint of Bohemia. Bohemia is a historical area of Europe, and is now part of Prague. 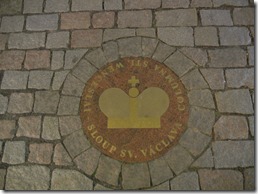 The square is famous throughout history and was used as a horse market during the middle ages. Traditionally it’s the site of demonstrations and festivals. We enjoyed the square; there seemed to be something new every day. I took the bagpiper pictures for our friends the Weeks. This square along with more of the historical center of Prague is a World Heritage site. 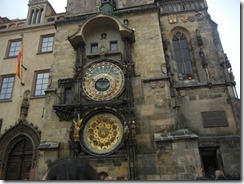 This clock, according to our movie bus tour guide, is the second most over rated tourist attraction in Europe. The first is the one in Munich. We have seen both but haven’t hung around for the actual show when the hour strikes.

Prague itself is a cool city with lots of interesting buildings; Florrie took pictures of the ones she liked the best. 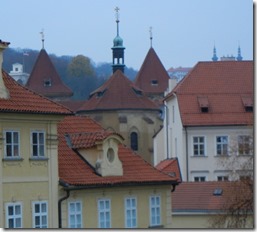 I don’t understand why she was drawn to this building, it’s kind of like her attraction to caves and small alleys.I keep telling her not to be so twisted but she doesn’t always listen to good advice. She said this building reminded her of one of her son’s favorite paintings. Can you guess which one?

One of the most famous sights/sites in Prague is the St Charles Bridge. Florrie got up early one morning so she could get a picture of each and every statue on the bridge with no people blocking the view. Rather than post them all, here is her favorite from across the way and then closer.

Here is a link if you’d like to learn more about the bridge: http://www.aviewoncities.com/prague/charlesbridge.htm

Another famous place that  was harder to find is affectionately known as the “Lennon Wall.” In the 1980’s young people wrote grievances on the wall and at one time this led to a clash between students and police on the Charles Bridge. This was before the “Velvet Revolution” when Prague was still a communist country. Later people started filling the wall with Lennon inspired graffiti and Beatles lyrics. At one time the wall was painted over but within a few days it was covered again. Now it is allowed to stay this way. One of my favorite songs is “Give Peace a Chance”, Imagine that. 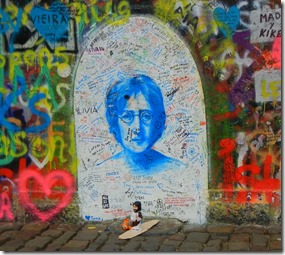 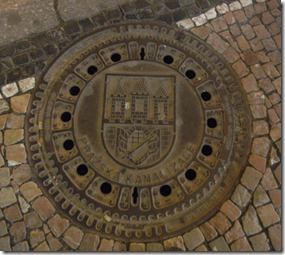 Well that’s it for now, until we meet again have fun but be good. You never know what might be against the law! 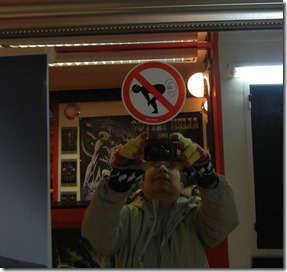 Posted by Jesus and Nemo at 1:48 PM No comments: