As promised we are back to let you know how the bento box full of good luck food worked; we did not fulfill the part about doing it by the end of March. It's a good thing I'm only a bobble head Jesus and not the real thing. or there would be a lot of disappointed people in the world. The good luck bento box mentioned in our last post was delicious and so far we have had pretty good luck this year.

Because we are in Northern Japan our year started out with snow and cold. My friend Florrie was able to enjoy the cold and cross-country ski again. 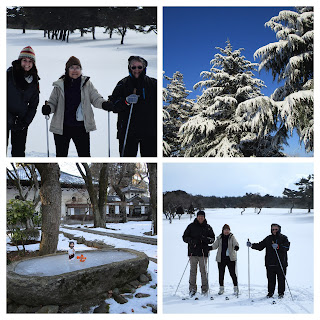 One cold day this bird offered the perfect photo opportunity. 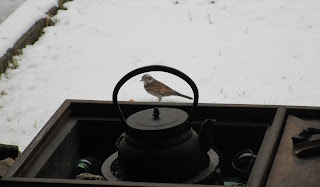 2018 started out with some fun music opportunities. 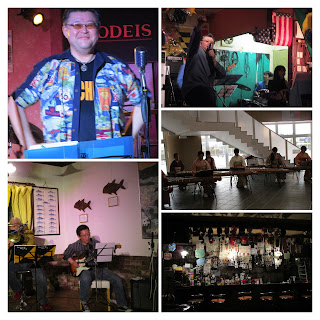 We watched our friend Wada perform in both January and February. In January he proudly wore the Route 66 shirt Chris sent him after we left Japan in 2011. In February he played at some crazy bar in Misawa. We also saw a jazz musician at Wada's restaurant and at the Misawa International Center we were treated to a performance of Koto.

Speaking of the International Center we also had a lesson in making Mochi; a pounded rice ball traditionally eaten in a soup at New Year's. It is very chewy! 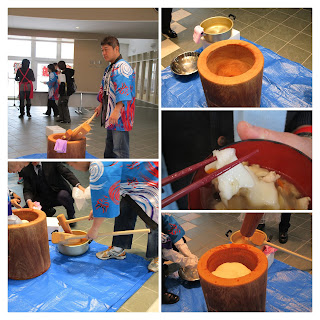 There is always good food to be had in Japan and it's especially nice when you share it with friends. There was a bouillabaisse festival in Hachinohe; our friends Yasu, Yuri and Mana invited us to check out the special menu at one of the local restaurants. It was very good, but Florrie and Chris think Japanese food is better. 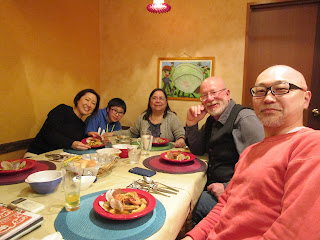 We also checked out this restaurant that looked kind of dumpy on the outside but had a marvelous view and ok food. 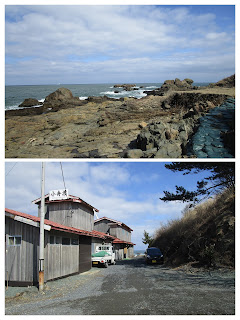 We increased the food related fun when we invited our friends over for a special dinner. Mana asked permission to bring a friend so there were four guests. 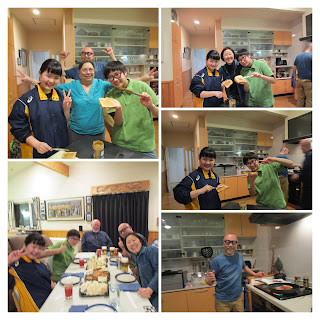 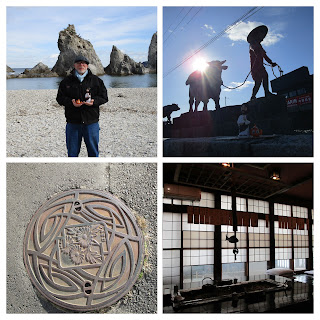 Later we decided to spend a weekend in Morioka where we wanted to see the 500 Buddhas at the Hoonji Temple and check out the handicraft village. Above are some of the sights along the way. Nemo is always happy when we go to the ocean and I was looking forward to meeting fellow holy people. Here is a small sampling of the many Buddha's and other interesting spots at the Temple. 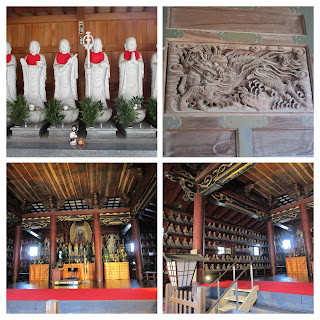 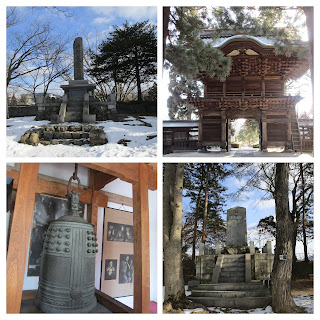 The handicraft village was also fun. Nemo and I met some fans, we played with toys and we all learned to make homemade ramen and traditional Japanese cookies. 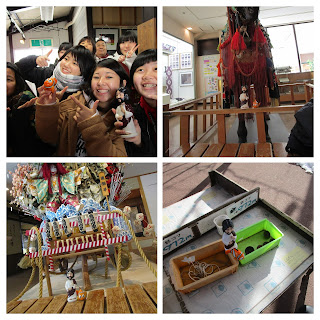 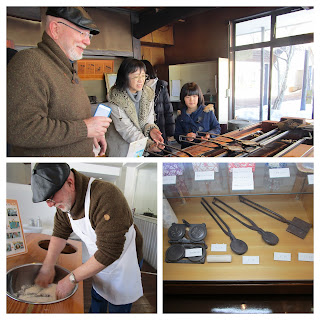 I was not surprised that there was no Gideon's bible in our hotel room. Here is what we found instead. 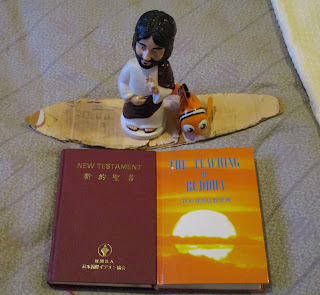 The end of March ( and supposedly the beginning of spring) was an exciting time here. Florrie's sister Joanne and her husband Allen came to visit! This is the second time they have visited us, they also came when we lived in Italy the first time. We were all so excited to see them! We couldn't wait to introduce them to real ramen. 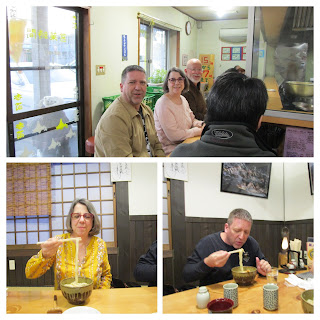 Their first night here Florrie and Joanne took a walk around the block to see a few local sights. 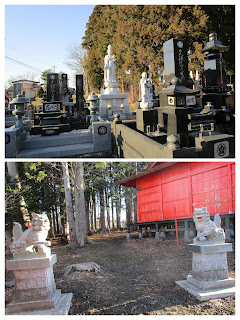 We also all went to a bigger shine a few towns away. Here are the guys properly praying at the shrine. First you purify yourself, that is what Chris is doing then you can follow the steps to pray which is what Allen is doing. The big guy is enjoying the sake left for him. 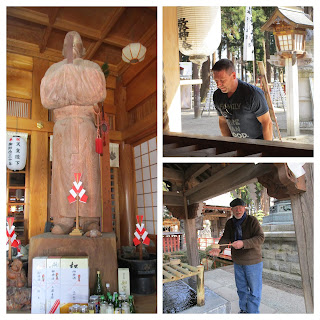 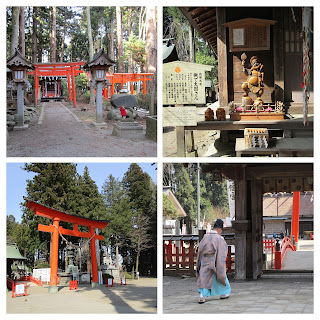 Do you see the fat happy guy, he reminds us of Bacchus who Florrie thinks of as the party god.
There was a museum at the shrine; we all enjoyed this Ninja Star Wars scene!

Every October and April an event called Yabusame takes place in this region. Florrie and Chris love this event and wanted to share it with Joanne and Allen but they there were here at the wrong time. Florrie and Chris were determined and undaunted and were able to find out where they practice. The first day we drove up to the farm unannounced and happened to run into the owner. She was thrilled that we were all interested in this exciting sport; and when she found out that Joanne and Allen were visiting from American she had to give Joanne a gift; a purse she had made out of an old kimono. Florrie's brother, who recently moved to Georgia, will be happy to hear that the reason Ayuko (the owner) wanted to give Joanne a gift is because she had just returned from giving a Yabusame exhibition in Georgia and had been treated wonderfully by the American's she'd met there. Of course, I do always say that you can find more good people then bad everywhere in the world. Sometimes it can be a job to find them but they are there. Here are Joanne and Ayuko. 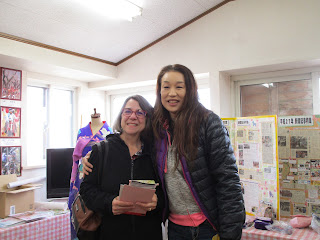 The next day when we went for practice we brought Ayuko and her crew gifts; cakes. Most Japanese houses either don't have ovens or have small fish ovens. If you think about Japanese food there is not a lot of baking or roasting going on. Cakes are a real treat for the Japanese, but not with that disgustingly sweet frosting many people like. Everyone enjoyed the cakes and we enjoyed the practice. Not only did we get to watch stance and shooting practice; we got to meet the master Yabusame teacher of the Tohoku region! It was an exciting and fun time for all! 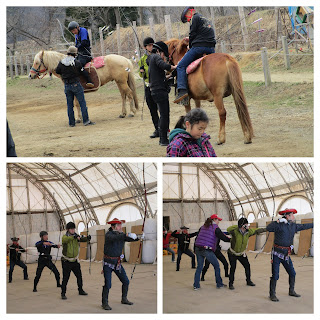 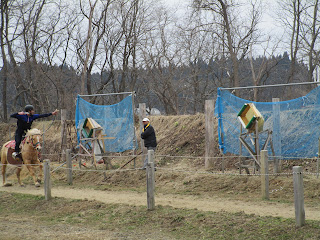 When they have the exhibition they all wear elaborate outfits, you will see those later. For now I am going to say good-bye. There will be another post (hopefully soon) so I can catch you all up on the rest of Joanne and Allen's visit and the rest of our spring. There is a chance you will actually see the post before next winter. Until then sayonara from Northern Japan.

Posted by Jesus and Nemo at 2:57 AM No comments: