Jesus and Nemo go to Venice

My illustrious ancestor created a universe in just six days while I can't even get a blog post up in under six months! 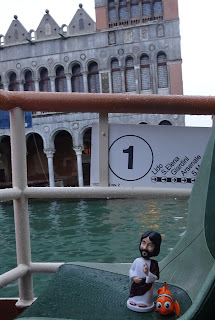 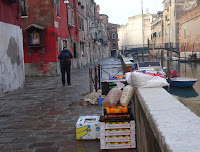 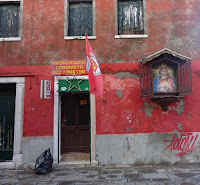 Years ago (the last time we all lived in Italy) we planned a trip to Venice which never happened. We have finally made it. We loved Venice right from the beginning. Our first night we stayed in a working class neighborhood. We all enjoyed our glimpse into the everyday lives of people living in this remarkable place. Even the trash pick-up was fascinating to us! 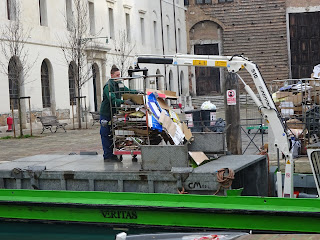 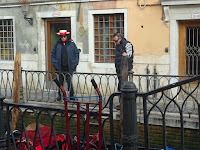 We spent some time watching the gondola guys preparing their gondolas. 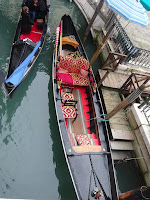 The rest of our stay was spent in a hotel farther in the maze that is Venice. Here are some of the sights/sites we passed over and over again when we went out and tried not to get lost. This was the Porta Magna at the Venetian Arsenal 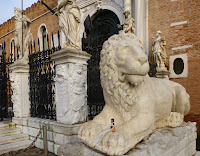 As you no doubt noticed, I did not have control over the weather; it was wet and chilly most of the time. That didn't stop us from spending time wandering around. 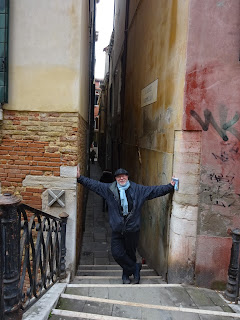 Chris liked this little paved street.
If you remember not to only look ahead but to look up and to the sides there are amazing things to be seen everywhere in this world. 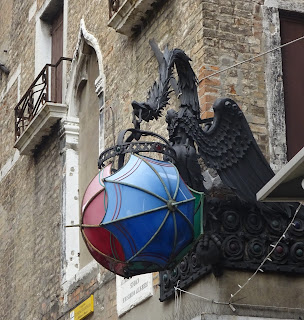 We weren't sure what these were except that they were beautiful. 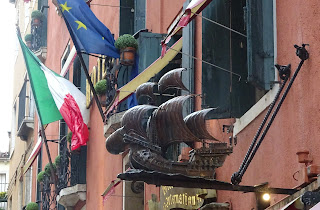 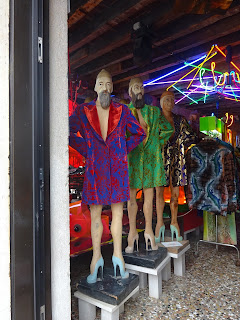 We can't tell you anything about these men, we just
couldn't resist them. We checked them out every time
we walked past.
As you may have heard, Venice is famous for it's bridges. There are probably hundreds of them.  At one point we heard a miserable, wet woman say to her equally miserable, wet male partner, "You said it was the last bridge at the last bridge we crossed".  We had a better time than that couple as Florrie and Chris had a rule that they had to kiss on every bridge. Some of the kisses were very hurried but there was a kiss on every bridge. 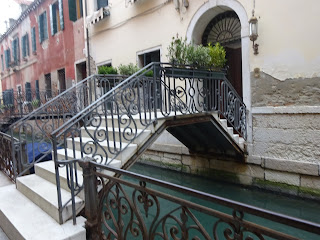 This bridge belongs just to this house, it would be fun to have your own personal bridge, don't you think? 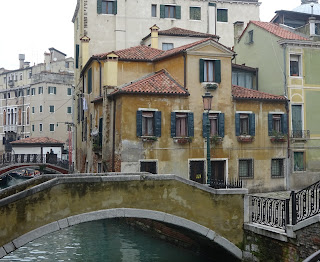 A lot of the bridges were more like this one,
small and not so ornate. 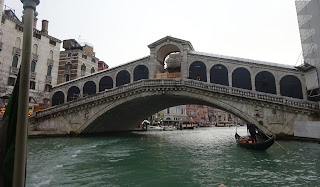 The famous Rialto Bridge. It was in the midst of repairs so we couldn't actually walk on it. 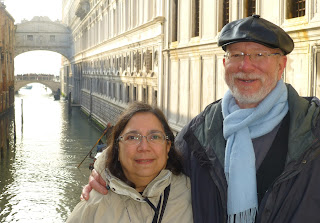 Here are Chris and Florrie at the Bridge of Sighs. The story behind the name is that the prisoners crossing the bridge connecting the halls of the courts between de Duke Palace and the New Prison sighed because they were looking at the outside world for their last time. This is probably not true because you can't see much from that angle. 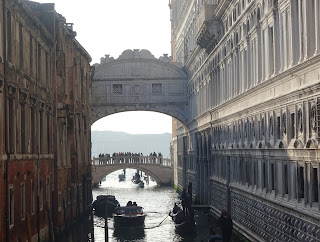 It could have been that the sigh was the last breath of the prisoners in the free world because once they were convicted they could never go back. Today, the bridge is a romantic symbol.


We spent part of the rainiest day inside. We toured a Doge's palace and a hidden treasury.  Do you notice anything different about these clocks? 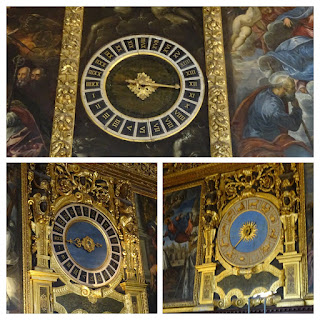 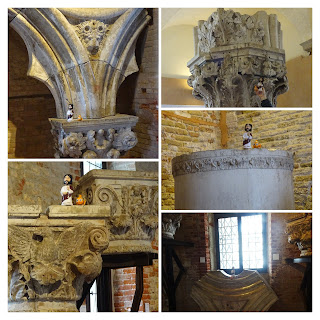 As many of you may know there are lots of columns hanging around Europe.

There was an armory in the palace. 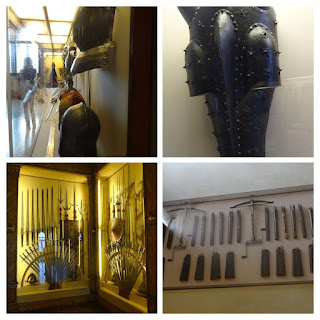 None of us like the idea of war but we all found the armor amazing. 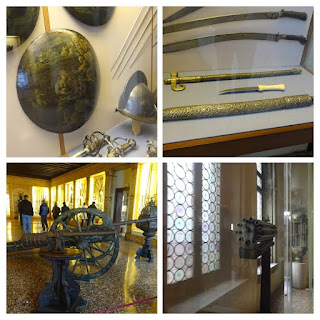 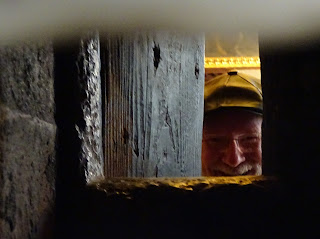 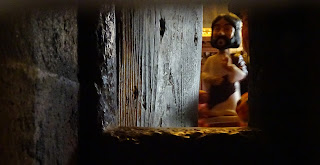 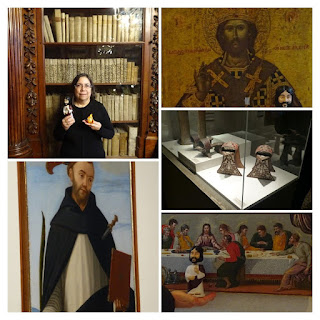 Florrie just loved this library and wanted to share it with us.We were all fascinated by the high heeled shoes. The man with the knife in his chest and the cleaver in his head is Saint Peter Verona; he was killed on April 6th, 1252 on the road near Milan Italy. There have been miracles at his tomb that is why he's a saint. Last Supper painting always cause mixed emotions for me.


As often seems to happen when we are in museums with Nemo, he gets carried away and goes someplace he shouldn't. He gets caught most of the time but he never learns. Because I care about the least among us as well as the greatest I jump to his defense and then I am in trouble too!

We also spent some rainy time on a water taxi. We saw many beautiful buildings from the water taxi. We all thought it would be quite interesting to live in a place where your mode of transportation was either a boat or feet.
We took the water Taxi to Burana which is one of Venice's islands and is famous for its beautifully colored houses and its lace. We found the umbrellas very interesting. 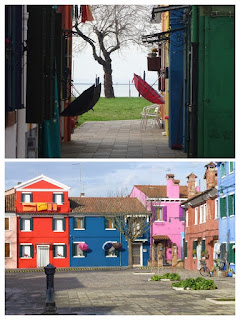 Dante's Barque (boat) was sculptured by a Russian named Georgiey Brangulyan, the man is pointing to San Michele which is the Venetian burial island. In the famous poem he is pointing to hell. The bird was just hanging out people watching. 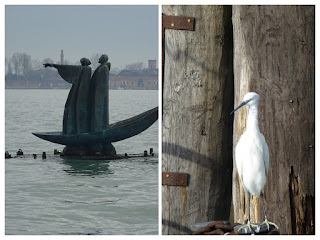 You know all those pigeon's hanging out in Saint Mark's square in Venice? Apparently they don't like the rain much. 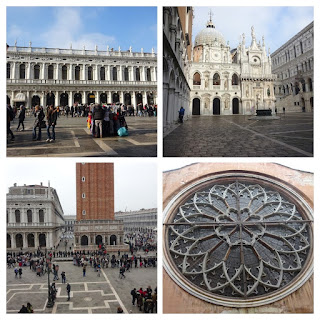 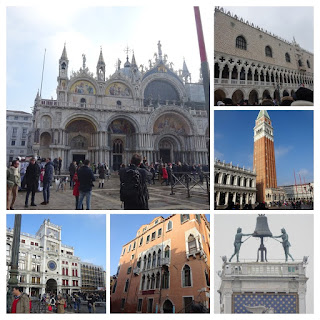 As I said before the lion is the symbol of Venice. In St. Mark's square you can see the pillars holding the winged lion and St. Theodore of Amasea who was patron saint of Venice before St. Mark. He is holding a spear and standing on a crocodile. 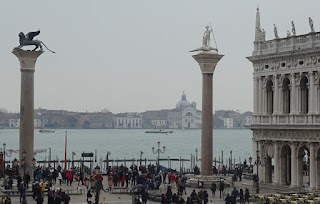 It is time for us to say good-bye. Our next trip is in our own back yard; well, at least on our own little Island. Hopefully I'll get to it soon. Until then Ciao.
Posted by Jesus and Nemo at 9:06 AM No comments: