Almost on the spur of the moment Chris and Florrie decided that we needed to take the road trip we didn’t take over spring break. 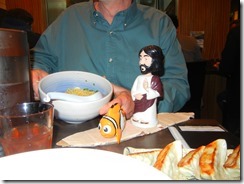 We left Winnweiler the morning of the 24th of June and headed to Dusseldorf Germany where Florrie had heard you could get an authentic bowl of Ramen. Our rating: for Germany 5 out of 5; for Japan 3 out of 5. 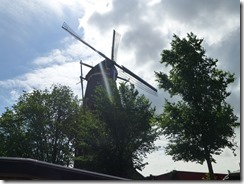 Our next stop was Amsterdam, where Florrie imagined we would see windmills everywhere we went. She was wrong but we did see some.

After that we all got tickets for the hop on hop off canal boats. There we met a very nice man from England, his name was Tony and he shared a birthday with Florrie.

We were all impressed with the buildings, some very modern, some very old. Our favorite one was named after our little orange stripped friend.

The Red Light District was interesting. We did see many scantily clad young beauties in some of the street level windows but we didn’t take any pictures.  You will just have to use your imagination. 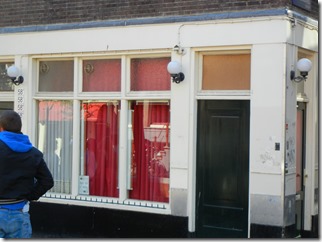 Florrie couldn’t resist taking these pictures; they are for one of her sisters. Florrie refused to tell us her name but I know who it is.

I don’t know what you all know about Amsterdam but there are lots of places where you can get marihuana here.

Although we did not partake, there were whiffs of it everywhere and we think that is what caused Nemo and me to have a horrific flashback of living in GTMO!

The four of us went to the Rijksmuseum; most of the time the weather was much better than Germany’s so we couldn’t stand the idea of being inside. This museum is huge, we didn’t see it all. Florrie took us into the Ann Frank museum; there were no pictures allowed there. It was very moving; Florrie says she is going to reread the diary now.

Crossing the streets in Amsterdam was a feat; we had to watch for bikes, trams and cars. 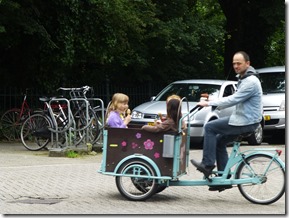 Check out this link about bikes in Amsterdam: http://www.nytimes.com/2013/06/21/world/europe/a-sea-of-bikes-swamps-amsterdam-a-city-fond-of-pedaling.html?pagewanted=all&_r=0

Until next time tot ziens (see you later).

Posted by Jesus and Nemo at 1:28 AM No comments: