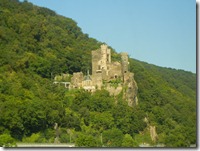 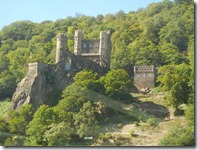 OK, it’s definitely been more than a week but events in the world keep a person busy. Here’s the promised post about our visits to the Rhine River. Our friends Chris and Florrie took three trips to the Rhine, all within a months’ time. Nemo and I were not invited on one of the trips. That was a mistake, we were missed! At least Nemo was, reminds me of China when no one recognized me. The first trip was a boat ride down a section of the Rhine. As some of you may know, the Rhine River is loaded with castles, I guess everyone wanted a piece of it back in the day. 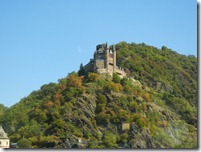 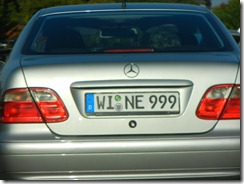 There were lots of grapes too, you all know how important they are for making There were some typical but cool places. This spot made Florrie think about the book “Stones from the River” 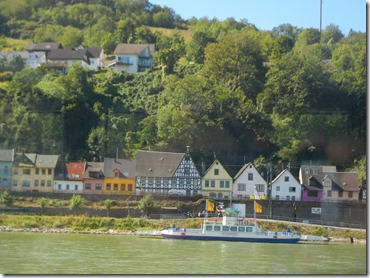 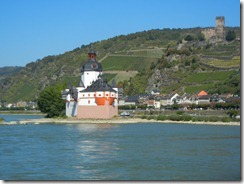 There was some discussion about whether this was actually a boat or a stationary building.

And, of course, there were even more castles. Florrie and Chris were imagining what it must have been like when everyone wanted to be “King of the hill”. 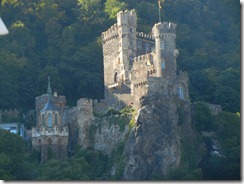 Here you can tell where the builders carved part of the building out of the stone. Florrie wants to climb around in this last castle. As some of you may  know she has a thing for ruins. 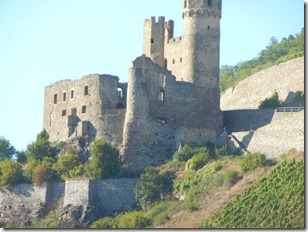 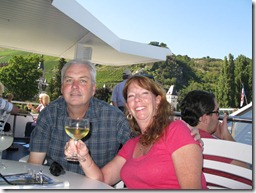 One of the best things about this trip was that we met a nice couple from the west coast. Rod is a bagpipe playing. He is performing in Oregon this weekend with Jamie Laval who is a well known fiddler. I haven’t heard Rod play but I’ve read about him and Jamie in Google and they both have some rave reviews. Nancy loves to garden. She was actually born in Germany, not to far from where we live now. Her father was in the Army here. This was the first full day of their European Vacation. We all stayed on the boat for lunch rather than rushing off to find a place to eat. We were glad we did, it was beautiful, enjoyable, and relaxing.

Our next Rhine River trip was to the town of Rudesheim which is a wine making town in the Rhine Gorge and is actually part of a UNESCO World Heritage Site. 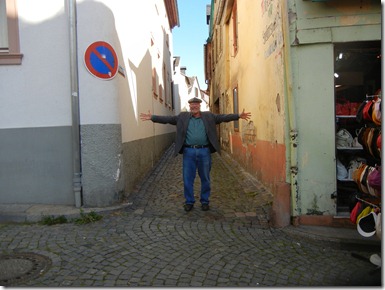 This is where we discovered that even a Mini can be too small for some roads, at least if you don’t remember to bring in the side view mirrors, and are forced to back up once you discover you are on a one way street. I don’t know, would you all call the spot Chris is standing on a street? 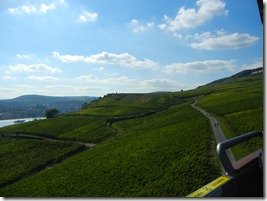 Look at all the grape vines, have I told you all I love wine. Beer is good too. I think the things people can do with grapes and hops are just miraculous.

The town is very cute although rather touristy, we took a ride in a cable car. This is where a tragedy of possibly epic proportions occurred. In a scene reminiscent of the Exorcist, my head spun around and feel off! Luckily it landed in the cable car or my friends would have been hunting in the wine fields for days and days! My friend Chris was a savior and reattached my head! Poor Nemo was beside himself with anxiety but all ended well.

After that dangerous above ground expedition we all decided to play it safe and keep our feet on the ground. 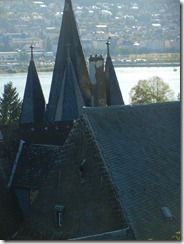 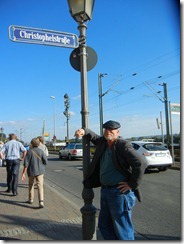 We wandered around the delightful little town.

After a sumptuous German lunch where we were treated to an interesting musical performance we headed back home. 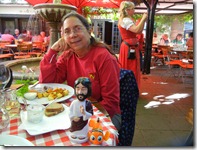 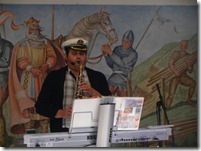 The last Rhine trip of the month was when Chris and Florrie went to meet a friend from Columbus who was on a Rhine River cruise.  Mary Ellen worked with Florrie at Independence High School. She was on a very interesting trip with a friend. After the trip down the Rhine they were picking up motorcycles and spending the next two or three weeks biking around Europe. Sadly we were left home. Almost the first thing Mary Ellen said after hello was, “Where’s Nemo”. I just don’t understand why she didn’t say “Where’s Jesus on a Surfboard”, I felt like chopped liver when I heard the story. But, I turned the other cheek and forgave her. Mary Ellen is the woman in blue, the woman in orange is her friend Dorothy. Chris and Florrie had a lovely time and hope to see both Mary Ellen and Dorothy in Europe again; next time we will go with them. 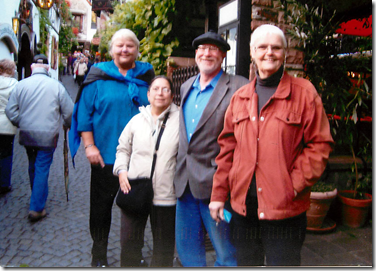 This is the end of the Rhine River stories. Next will be the Vltava River in Prague. In German it’s called the Moldau River and was made famous in the song My County by Smetana. You will have to wait more than a week but hopefully less than a month for that post.