On Sunday April 3rd we went with Florrie on a clean-up trip. We were all proud to travel with so many military members. These men and women are working extra hours everyday yet still find time to volunteer every weekend. There were two bus loads of people going on this clean-up mission. 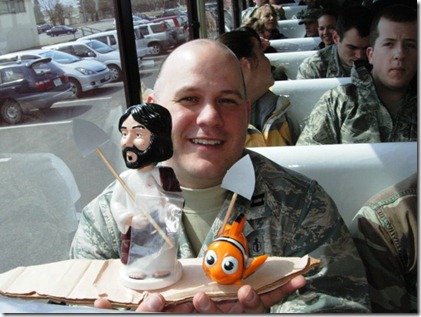 This is our friend Corty; we met him on the trip we all took to Kyoto. As you can see we have our shovels and trash bags. Hach is only about 10 miles south of us. Chris’s favorite fish market is there. Our mission was to help clean a rice field. 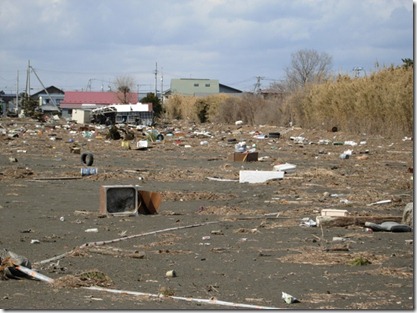 Do you see the broken down shack like thing in the back? That is part of a house that was on the edge of the field. The people who lived there had already salvaged what they could of their home, all that was left was thought to be trash. You can’t tell by looking at the picture but about six inches under the dirt there were at least ten rugs. You’d start to pick up the corner of what seemed to be a little matt only to need someone to help you dig this 6X8 rug out of the ground! The field had also been partly covered in plastic in preparation for planting so there were huge long sheets of plastic all rolled up in and around other things.  The saddest part for Florrie was when she unearthed a bunch of bright fingernail polish. She imagined the young women who had lived there and lost everything. 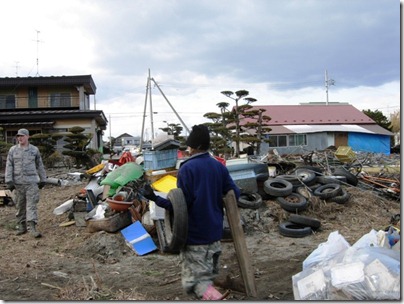 You can see some of the trash we collected. We tried to separate it as much as possible. All the wood (walls, parts of dressers, tea boxes, branches etc.) was in one pile, then tires, metal, plastic, and misc. Florrie and another woman each found a fish. Not a cook for dinner fish, a left behind by the tsunami fish. Someone else found a dead gull. Someone found a photo album that we thought could be saved. When the man who had lived on the edge of the field saw it he almost cried. He showed us pictures of himself in his Japanese Defense Forces uniform. 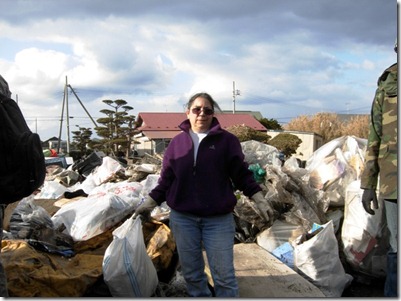 After an afternoon of work the field was mostly trash free but we aren’t sure if it can be planted in rice yet. There is still a thick top layer of pine needles. 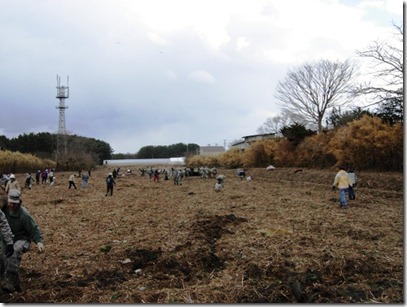 If you look closely at this picture you can see how deep the top layer of pine cones, leaves, and soft unidentifiable stuff is. The place that looks like a little trench is where we dug out a bunched up carpet and some  twisted metal that used to be part of a plastic and metal green house from the fields across the way. 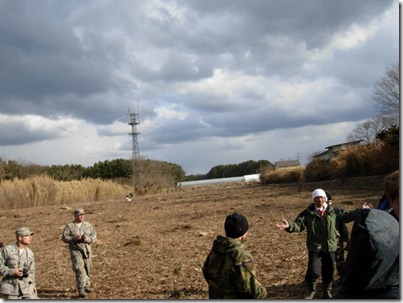 In the background of this picture you can see one of the plastic and metal greenhouses that were replaced during last weeks clean-up in this area. You can also get an idea of how much was picked up in this picture.  We are standing at the opposite end of the field where the broken down shack like thing is in the second picture.